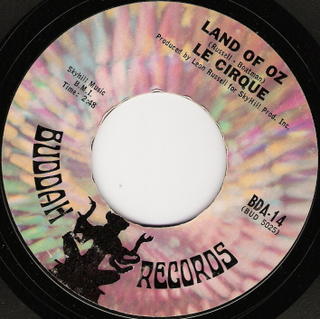 Certain record labels never cease to interest me. Oh, there are the obvious ones, like King and Specialty that released loads of great records that I continue to discover. Then, there are the less obvious ones, like Wand, which in addition to hit makers like The Kingsmen and Isley Brothers, put out a whole lot of good, lesser known r&b, soul, garage and what have you. Another label that fascinates me is Buddah, known primarily for its bubblegum acts, such as The Ohio Express and 1910 Fruitgum Co. And while a lot of the label's product tended towards the sweet, sticky stuff, some of it is truly outstanding.

Let's take today's selection for example, "Land of Oz" by Le Cirque. The group was surely nothing more than a one off, a studio concoction. In fact, Leon Russell co-wrote and produced this single and also reportedly played on it. One of Buddah's early releases, it likely came out in the fall of 1967. It's relative obscurity would seem to indicate that it didn't sell many copies, which is too bad because it's a terrific song.

In reading what little that's posted around the internet about "Land of Oz", I don't see much mention of what sounds like an obvious Beatles influence to me. Maybe that's because it's so poppy but I'd definitely cite the Fab Four's Magical Mystery Tour and Sgt. Pepper era material as a reference point. Here we have a song that's pure pop, with an intoxicating hook that's also dressed up as light pysch, via the lyrics, vocals and some studio gimmickry.

"Land of Oz" starts normally enough, with a mid-tempo beat. The lyrics are what I'd call "Lucy In The Sky With Diamonds"-light, conjuring vague psychedelic images and including a call for sitars and violins, which come in at the appropriate times. The vocals are sung in a trippy manner by stretching out some of the words. Near the end of the song, we get sped up vocals that'll either have you thinking Munchkins or Alvin & the Chipmunks, I'm not sure which. But even the goofy effects can't spoil the fun here. The song is just too good a period piece and otherwise excellent. And if you ever stumble across a copy, I'd certainly recommend springing for it, provided it doesn't break the budget.
Todd Lucas at 10:24 AM