Roger Binninghof: "Over My Head" 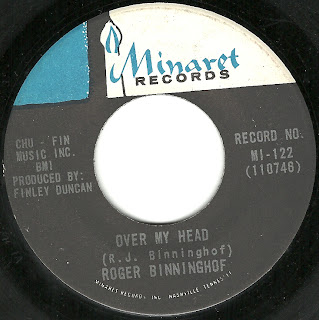 Well, here I was, thinking about shutting down this blog. Just when I was sure that I wanted to call it quits, I went and found a record that I just had to get up here.

This is the kind of record that It's Great Shakes was made for, terrific song and almost no presence at all on the net. I only found mention of "Over My Head" on a couple Minaret discography listings and, even there, they misspelled the artist's name.

I posted this song on Facebook and Jeff Lemlich commented to tell me that Mr. Binninghof was a student at Vanderbilt University, who had a hand in several Minaret releases. Thank you to Jeff for that info.

Anyway, "Over My Head" is a garagey winner and another reminder of just how many great records are out there waiting to be discovered. 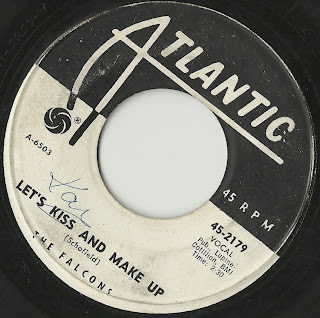 Back after a long layoff for a weekend post. Maybe I ought to subtitle this entry, "adventures in scratchy records, part one". I don't care though because, sometimes, records are great scratches and all.

I found this at a recent record show and it's a two-sided winner. My somewhat limited experience says grab a Falcons record whenever you see one. This rule certainly applies here. Love the guitar work, among other things.

The Carter Brothers: Do The Watusi 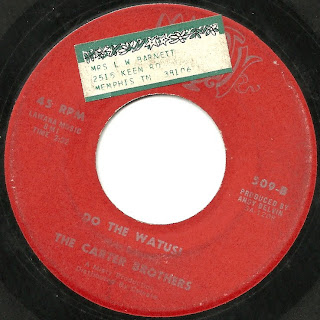 Here's one of my favorite of my recent finds. I like its wild qualities that take its standard dance realms to a higher plane. The group that did this also did "Do The Flo Show" and recorded several singles for Jewel between 1965 and 1967. I don't know where this fits in their canon, but I do know it's a winner, one that deserves your investigation. 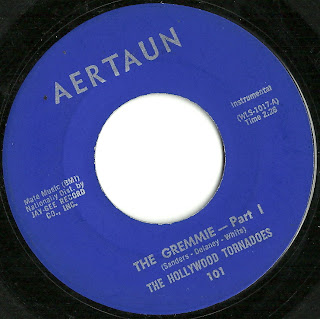 The Hollywood Tornadoes are actually the same Tornadoes that cut the classic "Bustin' Surfboards." Why they added the "Hollywood" to their name is not quite known (it might have been to avoid confusion with the British Tornadoes who were hitting big with "Telstar at this time), but one thing's for sure: this is certainly a two-sided rock 'n' roll instrumental cooker and that's really all you need to know. So let 'er rip. Hope you dig.

The Fifth Order: Goin' Too Far/Walkin' Away (Diamond) 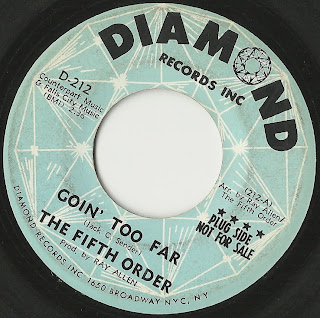 Well, it's time for another two-sider and what a two-sider it is. It's from 1966 and it's from a Cincinnati, Ohio group who first released this on the Counterpart label. When it scored big regionally (#1 in Columbus), Diamond picked it up for national release, but it didn't do as well. Whatever the case, this is classic garage pop. While it's not a screamer or anything like that, this is still damn great. Both sides are presented here and both are worth hearing. Also, check out the Flower Bomb Songs blog for more detailed information about this band. 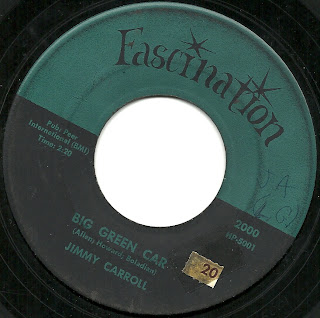 Look what a quarter will still get you. That's what I paid for this 1958 winner at a recent record show. Surprising too, since it'd sat for nearly half the day before I found it. I didn't know the tune but it sure looked interesting enough to risk two bits.

This thing has it all, from a revving engine to some great, wild guitar. Just click below to step on the gas.

And the acquisitions continue....

Hello again. Well, the 45 acquisitions continue to pile up around these parts. Here's the latest batch. Some were scored off eBay, some from Ray Peters, some from the Indy Record Show and some from a new used record store that just opened in Fountain Square.

But before I begin, I need to say in passing that I am currently grieving the loss of my dog Max. It got to the point where he couldn't climb the steps to the house anymore and he was whimpering in constant pain. I could see that the only thing to do was to let Max go. I am very devastated, so please forgive my having to pass this along to you.

In the meantime, here we go:

Floyd Cramer: Flip Flop and Bop (RCA Victor) This guy is best known for his softer instrumental "Last Date" and I believe he was a top session player in Nashville. This song here is a piano rocker produced by Chet Atkins. Pretty keen for what it is.

Boots Brown and His Blockbusters: Cerveza (RCA Victor) He also had a version of "Chili Beans." which I also have. I believe this was a minor Top 40 hit in 1958. At least that's what the guy I bought this from wrote on the sleeve. Pretty kickin' instro with a Latin flair.

Los T.J.s: Pure De Papas (RCA Victor (Spanish) (This is one of my favorite pick-ups from the past month, a frantic take on "Hot Pastrami" with lots of screams and yells and a killer guitar break.)

Arthur 'Guitar Boogie' Smith: Philadelphia Guitar (Starday). Found this in the dollar bin and it's a red-hot guitar instro from a guy who first hit with "Guitar Boogie" for MGM in 1948 and recorded several records for that label.)

Mickey and Sylvia: There'll Be No Backin' Out (Vik) Pretty decent fast mover from the "Love Is Strange" duo. Anybody know what their best record is? Just curious.

Jimmy Maddin: Jeanie, Jeanie, Jeanie (Imperial) This is the original version of the same song Eddie Cochran covered. This has more of an R&B feel with a good guitar break.

The Five Dollars: Doctor Baby (Fortune) It's always worth picking up things on the Fortune label and this doo-wop number from a group that usually backed Andre Williams is no exception.

Jay Bentley and the Jet Set: Watusi '64 (GNP Crescendo) Good frat-style dancer. Don't know much about it but I do see it around a lot.

The Wolf Man: Strange (Okeh) Just what the title says, has Wolfman Jack-style vocals (could this be the real Wolfman Jack?) over a stompin' soul background.

Etta James: The Wallflower (Modern) "Roll with me, Henry," later bowderized by Georgia Gibbs as "Dance With Me, Henry." This is the original and it's great.

The Versatones: Bila/Tight Skirt (Fenway) According to my Goldmine guide, this is the second time this single's been issued. It's an upgrade copy of my Atlantic issue, which is all beat up. Both sides of this is off-the-wall doo wop madness of the highest order.

Little Richard: Dance What You Wanna (Vee Jay) Pretty good later Little Richard from 1965. He's also got a killer version of "Whole Lotta Shakin' Goin' On" on this label from about the same period.

Freddy King: Double Eyed Whammy (King) Smokin' hot soul platter from a guy who's got a lot of killer sides, both vocal and instrumental (of course). Comes complete with the expected smokin' guitar work. Me thinks this smokes, get the picture?

Johnny Fortune: Surfer's Trip/Soul Traveler (Park Ave.) Excellent surf guitar two-sider from a guy who's cut quite a few of them, including "Soul Surfer" and "Dragster." From 1963.

The Jive Bombers: Bad Boy (Savoy) Classic doo-wop heard in the end credits of John Waters' 1990 film "Cry Baby" (I think, though I could be wrong).

Stevie Wonder: We Can Work It Out (Tamla) Top 20 hit from 1971 in which Mr. Wonder funkifies the Beatles.

Chris Columbo: You Can't Sit Down (Battle) Interesting version of the Phil Upchurch/Dovells tune with emphasis on a coronet. Unfortunately fades out before the drummer gets to get some.

Clarence 'Frogman' Henry: Tore Up Over You (Parrot) 1965 oddity from the "Ain't Got No Home" moaner.

George Hamilton IV: If You Don't Know (ABC Paramount) The flip of "A Rose and a Baby Ruth" is this not bad rockabilly rocker.

Elmore James: Dust My Broom (Jewel) Killer blues as you can expect. Weird thing is that Elmore is mispelled on both sides. One side says "Elmo James," the other says "Elmer James." Weird.

Little Willie John: Take My Love (I Want To Give It All To You) (King) Another winner from Mr. John, this one has him in a fast blues mode.

Jimmy Patton: Ya I'm Movin'/Love Come Back To Me/Let Me Slide/I'm Not Shuckin' (Rollin' Rock) 1970s reissue of some really hot rockabilly that I do indeed dig.

Mae West and Somebody's Chyldren: Shakin' All Over (Tower) In which Ms. West brings her shimmyin' ways to rock 'n' roll. From an album called "Way Out West," I believe and pretty cool for what it is.

Mae West: Put The Loot in the Boot Santa (Dragonet) More West whackiness, this time for the holidays.

Sumpin' Else: Baby You're Wrong (Liberty) Pretty great garage rocker with some fuzz.

Eddie Bo: Dinky Doo (Ric) Not my favorite record from this New Orleans legend, but still pretty damn fine, even if a little too sweetened with strings.

There are a few others, but I need to listen to them a little more first. I've also got a few from last Sunday's record show that I have to go through. We will see.

Well, that about brings everything up to date as far as my record collecting goes. Hope you enjoyed reading it and hope to have a couple more things posted before too long. We will see.
.
Posted by Brian Marshall at 1:09 PM 10 comments: 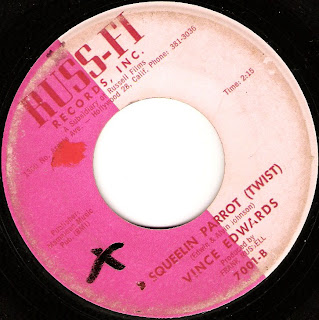 Just some fun here for a Sunday. I wrote a bit about this record on the blog about five years ago, before we had sound capabilities. Vince Edwards played Dr. Ben Casey on TV. He made a few other records. I'm not sure that a need to hear any of the rest. This greatness is the exception.

The Sidekicks - Not Now Great Beatles cop here. As it turns out, it wasn't just a one off. The Sidekicks were previously the Redcoats. Although the Redcoats didn't release material in their time, a more recent CD issue shows they had the Beatle bug all along. I'd recommend tracking it down, from 2001 on Dionysus. Meanwhile, the Sidekicks released an album in 1967. I haven't heard all of it but I can't imagine this isn't the best thing on there. "Not Now" is also the b-side flip to their version of "Fifi The Flea", originally by the Hollies. Stick to this side. 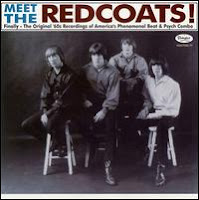 Round Robin: Gonna Tear The House Down Parts 1 and 2 (Shot) 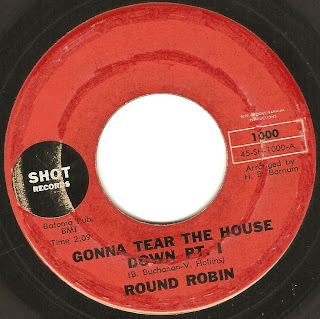 Here's one from a guy better known for doing a series of "Slauson" singles, particularly "Do The Slauson," which was a minor hit He's also better known for a very hard-to-find record (and one on my list) called "I'm The Wolfman. He also cut a 45 for Capitol called "The Vulture." He was an LA-based R&B artist who was a local favorite. A couple of his other sides are "Kick That Little Foot Sally Ann" and "The Roundest of Them All." This is a Round Robin side from the Shot label and it does kick a lot of booty. Both parts are presented here for your enjoyment.
Posted by Brian Marshall at 12:04 PM 5 comments:

Jay Dee Bryant: Get It (Enjoy) 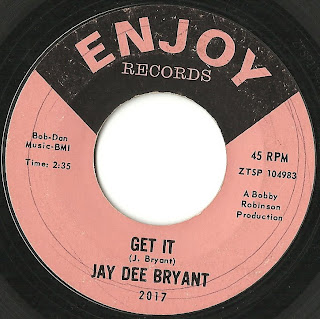 Here's a quick one for you to enjoy. It was featured in the blog "The Singing Bones" a few months back, but we're featuring it here because it's a great soul mover that just may fill the floor at your next dance party. That's all that needs to be said, so hope you dig.
Posted by Brian Marshall at 12:09 PM 2 comments: