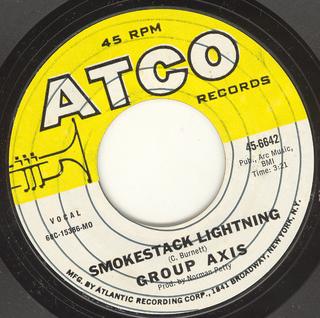 Here's something a bit interesting: a garage rock cover of a Buddy Holly song that's actually produced by his old producer, Norman Petty. (I am more than aware that Petty co-wrote the thing in the first place, so don't remind me.) And it's not a bad cover at that. As a matter of fact, it's got a real nice AM radio vibe to it that you could picture kids swingin' to it by the pool while the DJ's playing it. Of course, I'm talking about "Not Fade Away," which almost feels like bubblegum until a crushing guitar break comes in and conquers all midway through.

Side two's got another cover, this time of the Howlin' Wolf standard previously done justice by The Yardbirds. Group Axis' cover is not quite as raucous as Clapton's Yardbirds, but they definitely hold their own quite nicely. The teen vibe is gone in favor of a heavy psych vein, characterized by swirls of organ, tougher vocals and a killer fuzz guitar solo that closes things out.

I believe this was their only single, but don't quote me on that. But it should be relatively easy to find and should only set you back a fiver at the most.
Posted by Brian Marshall at 11:46 PM