Scatman Crothers: Golly Zonk! (It's Scatman)/What's A Nice Kid Like You Doing In A Place Like This? (Hanna Barbera HBR 476) 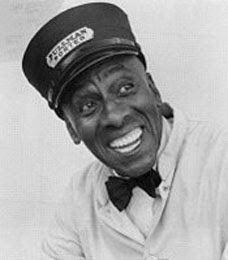 Scatman Crothers was one of the most familiar faces and voices in film and television of the 1970s and early 80s. You may remember him as Louie the Garbage Man from "Chico and the Man."
Or the voice of "Hong Kong Phooey." Or from the remake of "Kick The Can" from 1983's "Twilight Zone: The Movie." Scatman had been in films since 1951, but he played jazz (with Slim Gailard and others) and entertained in nightclubs since the 30s. So, in addition to being one of the most recognized character actors out there, he was also a musician, songwriter and composer. Which brings us to this 1966 one-shot offering for Hanna-Barbera's record company. "Nice Kid" is taken from a TV special titled "The New Alice In Wonderland" and it sounds like something that would be, though the Scatman gives it his all throughout, even to the p 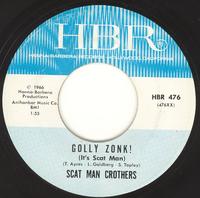 oint of telling the kid to do the monkey and the jerk with him. "Golly Zonk!" is the much better side, though with a title like that, how can it fail? Here we have Scatman rappin' with us that he's a too-man who can't say no to no wo-man! He says all this over a funky rhythm guitar track that keeps the whole thing groovin' throughout. Yeah, no one can say that Scatman wasn't cool, and this is one wild side.

Side note: the same instrumental track for "Golly Zonk!" was also used as an instrumental for the B-side of a single by The Pop-Ups called "Candy." This time, it was called "Lurking." Talk about a toss-off.
Posted by Brian Marshall at 5:17 PM

One cool thing about the internet is that websites and blogs just hang around for years.

My alt/indy music aficionado son just played me a song with a sample of Scatman Crothers on a track by somebody named "Buck 65." So here we are, meeting across time, space and generations. Great occasion to find your blog. A great resource! Thanks!

Shame I missed out on getting the MP3 to this song since it interests me now.