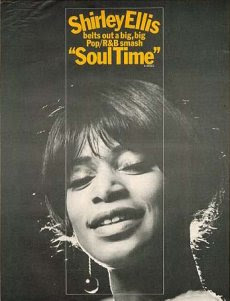 Okay, let's not go into "The Name Game" or "The Clapping Song" here. Not that those are bad songs or anything. They aren't, but repeated overexposure on oldies radio have made them a little annoying. Besides, here's a Shirley Ellis 45 you may not have heard before that you just might dig. 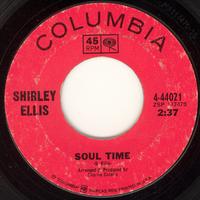 This one was one of three singles Ms. Ellis recorded for Columbia in 1966-67. It's worth checking out for "Soul Time," a real booty shaker of a song. As the brass pounds, the bass propels and the beat kicks, Shirley tells us that it's soul time. "Ready, get set now, two-four-six-eight-ten, two-four-six-eight-twenty-two, mmmmm-hmmm." Then the backup singers join her for another round of two-four-six-eight-ten, before it's verse time again. When it's time for the record to close, they go to twenty, thirty, forty and so on. And the band just keeps on going, loud and proud up to the fade.

Now, while this might sound like another one of Ellis's novelty singles, this one's got enough energy and guts to get you out on the dance floor. That is, if you're not dead. Because if "Soul Time" doesn't move you, then you must already be crawling with rigor mortis.

For the record, Shirley wrote this and the B-side, "Waiting." And Charlie Calilleo, a well-known producer-arranger (with Beverly Bremers' "Don't Say You Don't Remember" among his many credits), produced and arranged this as well.
Posted by Brian Marshall at 5:41 PM

Just to go on record, I love "The Name Game".

Then, you will also love this one. And another one you'll love on Columbia is "Birds, Bees, Cupids and Bows."

Great tune! I have the LP that this is from, which also features the great 'Sugar Shingaling'.