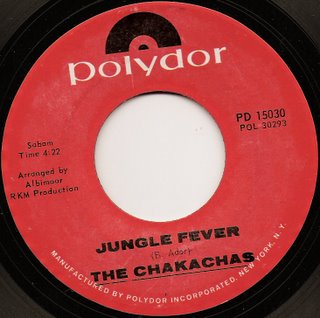 This one gets my vote for one of the strangest records ever to hit the Top 10. At a time when AM Radio was dominated by the likes of Climax, Beverly Bremers and, of course, The Carpenters (despite T. Rex sneaking in their only US hit), there was absolutely nothing else that sounded like this.

I'm talking about the winter-early spring of 1972 when the Chakachas' only charting 45 would go all the way to the #8 position on the Billboard Hot 100. Who were they, exactly? A sextet of Belgian studio musicians, all middle-aged and married, who got together, recorded some sides and then went their separate ways. Polydor Records then issued those sides stateswide, and, to the surprise of everyone no doubt, "Jungle Fever" became a hit. (For more information, I refer you to Wayne Jancik's superb book "The Billboard Book of One-Hit Wonders."

1972 was also a year of oddball instrumental hits from Apollo 100's "Joy" to Billy Preston's "Outa Space" to Hot Butter's moog piece "Popcorn." But "Jungle Fever" had to be the oddest of the whole bunch. Also the most sexually explicit, even though it's an instrumental. Because the song is punctuated at various pauses by the sounds of female and male orgiasmic moaning. One has to wonder how, with all that moaning and heavy breathing going on, this record even got played on the radio in 1972, let alone become as big as it did.

The song is characterized by its persuasive percussion, consisting of maraccas, congas and drums, which remain the driving force throughout, backed up by a jerky funky guitar riff and low-key horns. Things pause just enough for a female voice to go something like "Ah...no...no...I..I..." or similar before the funky stuff kicks back in. This happens two more times before we get two french horns blowing a subdued riff over the jerky rhythms.

The structure continues like this until towards the end, the moans get louder, the horns go off, the guitar kicks off, the congas and drums vanish and finally it's just down to the moaning and the soft hum of the maraccas. Then, the band kicks in for the big finish, stopping for one last satisfied moan and a low note on a trambone. End of song.

After "Jungle Fever's" run was over, you hardly ever heard it again. It disappeared from the airwaves and oldies radio hardly ever plays it (at least I've never heard it). But the 1997 film "Boogie Nights" gave it another airing during an early meeting between Heather Graham's Rollergirl and Mark Wahlberg. Yes, it's a sex scene. What else could it be?
Posted by Brian Marshall at 5:58 PM

I definitely think this is a very sexy song, and a hell of a dance number, you just can't help but feel the beat!!!!

This song knows how to leave an impression!

One more run for this song: Welcome to Los Santos! (GTA:SA)

I actually think the song would work with some helicopter in the background (don't ask me why)...

It was the official beginning of disco, that's why it was so different!

What disturbs me about this song is that it sounds like the woman is being raped. I mean, she keeps shouting "No! No! No! No!"

...and if she was shouting "Dear God!" would you think she was praying?

She was speaking in Spanish and she was clearly enjoying herself. It was no rape - but it was pretty good acting - if it was not real ?

To me it sounds like she's saying no more than yes, but more because she's dissatisfied than raped - with her voice, you'd think she'd raise it if raped and it would burn your ears off. Likewise, if whoever was diddling her actually got her off, she'd raise the roof, if not the dead.

This isn't official, but...
if it really is Spanish, I'd love to see a translation, and you can write this off as another Yatta

Musically, there's an awful lot of people playing not very much - they make Booker T. sound like prog-rock. Each player's got one riff, take it or leave it. And if you're a trombone player, one note's a riff. You'd never know it from jazz, but two notes make a sax riff. The closest thing to a melody, let alone solo, is the French horn - he goes up AND back down, THEN he does it again, different.

there's nothing about "you see, I see" or "I know" stuff, she's speaking spanish and she just keeps saying stuff like suave,ay que fiebre, así, dame, and other word from my language's sexy vocabulary. By the way great song! love it. muy buena canción y muy buen grupo!

(loosely translated, oh what a fever I have!)

Charter cable has that song semi-regularly on the 70's channel. Every time it comes on I mute it for my mom's sake. Too embarrassing.

I am watching this celebrity gossip show.

Or maybe hes not hitting that spot right?

there's nothing about "you see, I see" or "I know" stuff, she's speaking spanish and she just keeps saying stuff like suave,ay que fiebre, así, dame, and other word from my language's sexy vocabulary. By the way great song! love it. muy buena canción y muy buen grupo!

Yessss, it's still a favorite of mine. You just have to feel sexy when you hear this song, if you do not you are not , well you should get where I'm headed with this!!

Are you looking for the best app to grow your On Demand food delivery business? If yes, then the perfect app is here for you! With our advanced Zomato Clone app you can now make sure that you grow your business as a brand and start making a lot of profits. Our team of expert app developers has added the most advanced features relevant to the current situation of the market like contactless deliveries, cashless transactions, safety badge and much much more!

Zomato Clone is a readymade script with 100% customizable options for a robust on-demand food delivery app. Launch one today.

Readymade Zomato Clone App
Zomato like App for Food Aggregators & Restaurants
We empower food delivery businesses to run their operations online with the help of a bespoke and cost effective Zomato clone app. Our solution is integrated with powerful features, ready to go live within days.

If I remember correctly, the radio dj would say the vocal was taken from an African villager describing the fear of being stalked and preyed upon by the tiger while going about their daily routines of life in the African Congo.