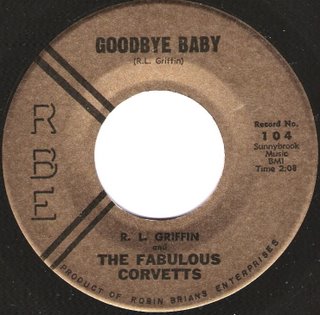 My apologies for letting this blog sit idle for two weeks. My available time last week was spent listening to the fruits of my labor from the latest St. Louis record fair, held on May 7th. Once again, I came away with scads of cool discs for minimal cash outlay. Yep, five bucks was top dollar and then only once or twice.

There will be lots from my latest St. Louis excursion in the near future. Over the next few days, I thought that I'd feature undocumented and vastly under-documented records found at the record show. Today's record is the first of these.

I could locate just one mention of the Fabulous Corvettes on the net (note the apparent band name misspelling on the label) and that could well be for a separate combo. I turned up exactly nothing on this record. What I do know is that RBE was a label owned by Robin Hood Brians, who operated his own recording studio out of Tyler, Texas beginning in 1963. There's an excellent article on Brians and his studio here. The terrific RCS website also lists two additional singles on the RBE label, one by Jimmy Gatlin and the Yellow Jackets and the other by The Velvets. Brians also recorded several records under his own name, beginning as far back as the late 1950's.

The instrumental version of "Stagger-Lee" on today's record credits merely The Fabulous Corvetts. However the vocal number on the flipside, "Goodbye Baby" additionally credits R.L. Griffin, a Texas bluesman, who appears to still be active today. Some online snooping does uncover documentation of Griffin's early band, an eight piece combo, being called The Corvettes, tho I can't find any mention of them recording.

In an online interview, Griffin says The Corvettes had a James Brown sound, among other soul influences. Well, there is a bit of that on "Goodbye Baby", penned by Griffin, himself. His vocals are smoother than J.B.'s and delivered more in the blues tradition but we do get treated to a bona fide soul outing, with horn charts and some funky guitar running throughout, including an extended break. The song is up-tempo and a nice little hip shaker.

Over on the flipside, the band delivers a solid, if unspectacular, mid-tempo instrumental workout on the classic "Stagger-Lee". The guitar is back, front and center and, this time, we get quite a bit of organ and saxophone.

I don't have a release date for the record. Based on what little I know about Robin Hood Brians' studio, the early history of R.L. Griffin and the sound of "Goodbye Baby", I'd guess about a 1964 recording date. No matter, it's an interesting obscurity and worth chasing down.
Posted by Todd Lucas at 3:33 PM