The Church Mice: College Psychology On Love/Babe, We're Not Part of Society (House of Guitars L-43) 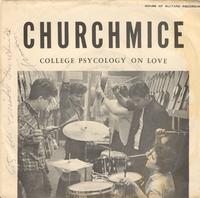 Ladies and gentlemen, I give you punk rock before anyone knew what it was! I mean, this has it all: snotty, gnarly vocals, ultra-primitive drumming that foreshadows The Velvet Underground's Maureen Tucker, loud, crazy guitar and a general do-it-as-we-go-along vibe. If you think you've never heard anything quite like this, you're probably right.

This 1965 record from Rochester, New York is the work of a band that featured one Armand Schaubroeck. Schaubroeck would later put out a series of avant-garde rock albums in the late 70s with such titles as "A Lot of People Would Like To See Armand Schaubroeck....DEAD!" and, best known of all, "Ratf**ker." On this record, with his fellow Church Mice in to 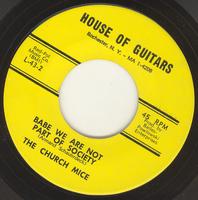 w, Schaubroeck ended up laying down a precursor to all the underground rock, punk rock, new wave and alternative rock that would follow.

Don't believe me? Then, flip on "Babe, We're Not Part of Society." Staying with a virtual two-note structure, Schaubroeck snarls out with a tiger-like rasp, "Well, I love you......and you love me......Babe, I guess we're not part of society." Already the Velvet Underground comparisons come to mind with the primitive drums, but then we've got punk rock coming up with Schaubroeck's off-kilter vocal. The drummer loses the beat toward the end and the band doesn't end the song as much as stop. If this doesn't point to all that low-fi stuff we saw in the 90s on all those indie labels, I don't know what does. 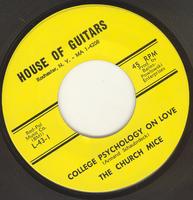 "College Psychology on Love" is equally crazed. And there's that word "primitive" rearing its ugly head again. I'm probably not finished using that word in this review, but it really does fit here. We go for three chords, this time with a chunky guitar riff played on the upper frets. "Me and the Church Mice wrote this song about college psychology," Schaubroeck snaps. "And we put it on record." And let's be thankful they did.

And what exactly are their thoughts on the psychology of love? Well, maybe these lyrics can fill us in:

If a hippie comes up to you,
and says he wants to make you,
break you,
forsake you,
What'cha gonna do?
Gotta think it through. 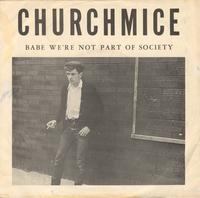 Well, in all my attempt to describe this record to you, I don't think I've fully captured it. How can I? You'll have to seek it out and hear it for yourself, because it's truly one-of-a-kind. And I definitely mean that in a good way. As a matter of fact, it's one of my favorites, especially due to the weird charm of the whole thing. Not to mention the audacity of a record in 1965 sounding like this. Some of you will think this is garbage. Others will think it's genius. I know which side I'm on.
Posted by Brian Marshall at 10:13 PM

Add this one to the list of stuff I wanna hear.

I believe he also formed Mirror Records, which was both his and the Chesterfield Kings' label.

One other thing I need to mention:
House of Guitars is the name of a store he owns, which explains the label name.

I've been looking for this record since 1987 when I got it on a garage comp.

This is a great record ,I got my copy from Armand himself when I bought his later stuff.."the triple lp set" another single..and an album by Jerry Porter.I intend to find the albums again ..I still have the singles.
check out www.tonkadoesnotrock.blog.com for my take on the world

i own it. have since ... gosh about '80. don't recall where i bought it, but only thing that prompted me to buy was the demented cover.... oops ... i think i recall i bought it at the old Bomp Records store in N.Hollywood.... probably when Danny Benair was marshalling the cash register!

PLEASE repost this! I have been after a copy for years!

Wow! I'd read Beat Happening were influenced primarily by Marine Girls (early Tracey Thorn project), but I wouldn't be surprised to find this 7" in Calvin Johnson's collection.