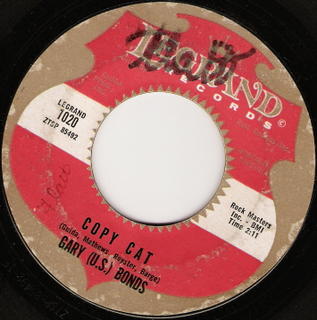 Gary (U.S.) Bonds began his recording career in 1960 for the Legrand label. He made a string of records for the label, including several that made the national charts. His huge hits "New Orleans" and "Quarter To Three" are about his best known and are both rock and roll classics. But perhaps nothing else he did was wilder or any better than his 1962 single, "Copy Cat".

The song clips along at breakneck speed, with a clobbering beat and Bonds' most intense, shouted delivery. And while it's not as crudely recorded as "Quarter To Three" (what else could be?) "Copy Cat" is pretty lo-fi in its own right, with Bonds' vocal surely pushing the needle far into the red. The sax break goes a mile a minute and we're quickly back for the next verse. And, while we're at it, the female backing chorus, as opposed to the norm, is most excellent here and doesn't detract from the proceedings one iota. Man oh man, this thing just smokes!

"Copy Cat" is also pretty notable for its lyrics. The song is about the "copy cat" recording artists of the day. Bonds lays it on pretty thick,

"Hey, little copy cat
I think you ought to know that
Copy cats just don't last long
And they'll soon have to go"

"Well, I said, yeah
Yeah, yeah, little copy cat
Why do you copy me
Why can't you find
A style of your own
And, baby, just let me be"

"I said, yeah, yeah, yeah
Little copy cat
Just who do you think you are
You copy everything I do
Right down to my Jaguar"

He then goes on to call out a couple of the big stars of the day during the chorus,

Chubby would, of course, be Chubby Checker, who based his career on aping the great Hank Ballard, beginning with his mega hit version of Ballard's "The Twist" in 1960. There were a lot of guy's named Bobby around at the time but, based on the balance of the lyric, Bonds must mean Bobby Darin, who charted with a version of Ray Charles' all-time classic, "What'd I Say" in early 1962. Towards the end, Bonds name checks Leon, Freddie and Curtis. I'm not exactly sure to whom he was referring in those cases. Any theories?

Gary (U.S.) Bonds was always as much a rock and roller as he was an r&b artist. He obviously influenced Bruce Springsteen, who helped bring him back into the fold in the 1980's. Another set of pupils were the New York Dolls, who had a go at his "Seven Day Weekend". They also seemed to lift the chorus of "Copy Cat" for their "Who Are The Mystery Girls". At least it sounds that way to me. Anyhow, "Copy Cat" is a great, great song and, while not his most common 45 for Legrand, shouldn't set you back much dough when you do locate a copy.
Posted by Todd Lucas at 11:15 AM

LeGrand's owner Frankie Guida was the one who 'tweaked' the tape recorder to give many LeGrand 45's that distinctive sound. He was no engineer, but tweaked anyway!

Frank Guida was Gary's nemisis, the Colonel Parker that didn't allow him to make music like Dedication. Gary is Gary Anderson who wrote Don't Take She's All I Got, a country tune that hit the charts and several others, If My Heart Had Windows, recorded by Johhnny Paycheck.

OOps... correction; "Don't take HER, she's all I got." That song was recorded originally by Johnny Paycheck and George Jones recorded "IF My Heart Had Windows," both written by Gary. Perhaps collaborated with Jerry Williams (Swamp Dog). He also cut a 45, not sure if it was on Legrand on the subject of taking a trip to the moon. Unfortunately I only remember a snip of the lyric, something about a rocket ship. This was written in the early sixties a tad before space travel.

Bert Burns who churned out hits for Freddie Scott, the girl groups and other contemporaries wrote a song that Gary recorded, some of the lyrics still whirl around in my brain, "I'm coming back, down the track, clickety clack..." but it wasn't the right chemistry. I believe the name of it was, "I Want You Back." But it was evidently the wrong track!

I can see why Bruce Springsteen and Steven Van Zandt keep coming back to Gary U.S. Bonds -- besides that great party sound, he's a delightful, charming guy! Terrific stories in this video interview about good times and bad, but no sex, no drugs! I think you'll enjoy this and hope you'll share it with friends! Thanks! http://www.mrmedia.com/2013/05/hey-bruuuuuuce-gary-u-s-bonds-is-back-with-a-rock-memoir-2013-video-interview/#.UaAdUeu_2pl