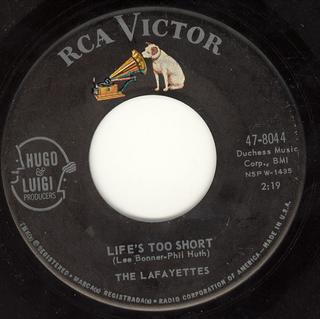 Ever see the film "Hairspray?" There's a scene in which this group (or what was left of the group by 1988) plays "Life's Too Short" for the swingin' teens on the Corny Collins Show. They're called "Baltimore's own." Seems like this must've been a big local hit, though it only reached the lower edges of the Billboard charts in 1962. #87 to be exact. That said, this is a pretty cool 2-sider with a mover and a slow groover to choose from. "Life's Too Short" is the slow one, basically a two-note song in which the singer tells his baby she'd better get ready for him.

Life's too short
to mess around
Don't you give me no stuff, child
Don't you put me down.

The musical accompaniment is chopstick-style percussion, heavy bass, light guitar strumming and a piano riff. There is a part where the singer goes "Oh oh" and the whole backup band acts up like it's finally gonna start moving, but it soon goes back to the way it was at the beginning and stays that way for the rest of the song. "Nobody But You" is even better. This time the singer starts out by rapping:

Y'know when all the other girls pass me on the street,
they give me my cue,
'cause it makes me realize,
right there and then, darlin',
that I don't want nobody but you.
That's right, heh-heh, I said....

Then, all hell breaks loose. The band kicks in and the singer goes nutzo: "NOBODY! NOBODY! NOBODY! AWOWWWWWWWWWW! He grunts, growls and screams as bass, guitar, piano and sax wail out behind him, before it all kicks to a close.

So there ya go, another one-shot, but a very cool one-shot at that.....at least as far as chart hits go. This was the only thing that ever charted from this group and I don't know if there are any other recordings. Maybe other gems await discovery. Who knows?
Posted by Brian Marshall at 5:38 PM

Also notable for the little aside before the break which was widely thought to be the f-word. "I say f---"...
Big hit in the Baltimore-Washington area, their home turf.

Always thought "Life's Too Short" was a great song and would have done well nationally with the right exposure. Most out of area teens really liked it when I played it for them. There was a nice article in the Balto. Sun July 28,2003 about the Lafayettes & the little know info that the song was a much bigger hit in Europe, England in particular. I've been trying to find a site with the full copy of the lyrics, not just the partial ones shown here. Thanks to John Waters for immortalizing the song & it's unique sound in Hairspray-

The other great local song was "The Stupidity" by the Van Dykes and was as popular as the Lafayettes locally. The Stupidity had a great unique beat and typified the high school years syndome

Five years late on this one but here are a couple of YouTube links to other songs by The Laffayettes.

and another while i'm at it!!!

5 years late here as well. Just picked up a box of 45's going to the dump and one of them was Life's Too Short / Nobody but You. Plays good. They rocked!

The guitar player on lifes to short and the bside of that is my dad Steve Taylor. Its nice to see someone with good things to say about this band. The odd thing is, in Europe they still add Lifes To Short on a lot of compilation albums.

I've been looking for LIFE'S TOO SHORT for the past 5 years; the last time I heard it was 47 years ago...it was a very cool song... especially w/ the 'f-word' reference played on the air in the St. Louis. Mo. area in 1963...many thanks to everyone who remembered it enough to pay it tribute and give us a chance to hear it again!

The Lafayettes played my junior prom at McDonogh School (just outside Baltimore) in 1964. The band really energized the room and I remember the singer covering his mic with a cloth (to lower is voice a register) in order to sing the Four Tops "Reach Out" that Motown had just released. The crowd went so crazy over this rendition that the band was forced to play this song 3 times. Thankfully they played their then hit "Life's Too Short" twice. Great band, great night, great girlfriend and great memories.

The song shows up at around the 25:20 mark in this Brian Eno documentary by the BBC. He rhapsodizes about hearing it on a jukebox in his tiny English town, which in the post-war period catered to a nearby US base. "A very mysterious song that really meant a lot to me":